Get Registered for the Festivus Games hosted by FOCF

Join FallOut CrossFit in celebrating “Feats of Strength for the Rest of Us!” Have fun, challenge yourself and do it with a friend!

Festivus Games was designed so it wouldn’t be necessary to scale the events. No athlete, whether six months in or brand new, will need to scale any of the events. The competition is about capacity more than a high degree of skill. Everyone can row…just how fast? Everyone can deadlift..just how much?

Be sure to check out the category guidelines to pick the division that best suits you!

THE NOVICE DIVISION – The perfect fit for your first functional-fitness competition.

INTERMEDIATE DIVISION – We promise it will challenge all but the best athletes.

MASTERS DIVISION – For our 45+ athletes who have the heart and fire to complete.

We are now through 2 weeks! Congrats to the remaining FallOut CrossFit students who continue to make fitness, consistency, and school spirit a priority as we continue through the month. A few unfortunately fell off the board this week, but it’s exciting seeing everybody in the gym more and more! It’s only making you stronger, faster, better! Just 2 more weeks to go!  Awesome work to those people who are pushing the envelope & made extra workouts for the week!! Keep up the hard work!

The use of the term “gymnastics” in CrossFit does not necessarily focus on what we think of as “traditional” gymnastics. Rather, it also includes activities like climbing, yoga, calisthenics, and dance, where the aim is body control. The starting place for gymnastics competency lies with the well-known calisthenic movements of pull ups, push ups, dips and rope climb. Set goals for achieving benchmarks (10, 20, 30….reps without stopping). CrossFit Coach Glassman explains that “Assuming the grip is O.K., a common barrier to the muscle-up Is not being strong enough. Here’s the litmus: if you can do fifteen good pull-ups and fifteen good dips, then you’re strong enough. If you can’t, work your pull-ups and dips overtime until you can do the muscle-up.” 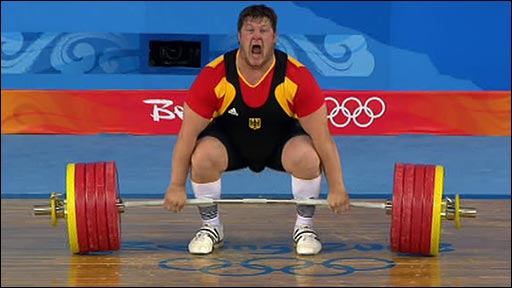 If you don’t know this story from the 2008 Beijing Olympic Games, you should learn the story of Matthias Steiner. He started lifting in 1995 and comes from a family of great lifters. Diagnosed with diabetes that was onset by a untreated infection he still pursued his dream of weightlifting. In 2004 a German woman had watched Steiner participating in weightlifting contests on TV. She kept asking the Eurosport commentators for his email address, until they gave it to her. She contacted Steiner, and he agreed to meet her in Lower Austria. They married shortly thereafter and hence he moved to Germany, where he then applied for German citizenship. On July 16, 2007 his wife Susann died in a car accident. Despite the tragic loss, and after he was able to continue his training. During the Olympic competition, Steiner failed in his third snatch attempt, and with 203 kg ranked fourth after the snatch. Viktors Ščerbatihs, the favorite to win from Latvia, was in position to take the lead in the clean and jerk, but failed in his second attempt. Steiner also failed in his first clean and jerk attempt, and Russia’s Evgeny Chigishev took the lead with 250 kg in the clean and jerk. Ščerbatihs failed in his third attempt, which would have forced Steiner to increase his last attempt to 259 kg in order to win gold. He was successful with a clean and jerk of 258 kg, for a total of 461 kg combined between his Snatch & Clean & Jerk. Steiner became Olympic gold medalist and stood on the medalists’ podium and kissed a picture of his late wife Susann. Choking back tears over the promise he made to her that he would keep their Olympic dream, “She is always with me, in the hours before the competition, she’s there”. A truly inspiring story and for this man the medal was more than just a culmination of his training. 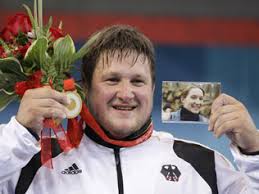 Snatch pull: This is the first and second pulls of a snatch without any attempt to pull under the bar. At the top of the extension, the athlete should continue attempting to pull the bar higher, keeping the elbows moving up and to the sides to keep the bar against the body. With heavy pulls, this will not move the bar very high. With lighter weights, a snatch high-pull will occur. http://www.cathletics.com/exercises/exercise.php?exerciseID=97

Shoulder-to-shoulder sandbag push press: grab middle of sand bag with both hands with the bag across one shoulder (front/back ends of bag in front/back of shoulder). Push press the bag up overhead to a fully extended elbow position and bring down to opposite shoulder. This constitutes 1 rep.