A article published in June in the New York Times, “Weight-Lifting Injuries on the Rise”, as it states in the title tries to show that weight lifting is dangerous. I would agree partly but not because it’s dangerous but because how people go about it that is dangerous. This study was a review from 1990 to 2007 of people working out, that nearly a million Americans wound up in emergency rooms with weight-training injuries and annual injuries were up more than 48 percent in that period. Does any one have any ideas why? Could it be because of things like this? 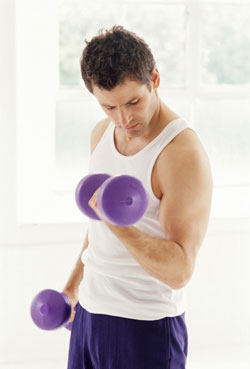 Our women CAN beat this guy up!

Now he may not be doing a whole lot of weight, but it’s exercises like this that lead to injury. People doing workouts unsupervised in your Globo Gym are most likely the cause of all of these injuries. I wish we had the data from CrossFit gyms to show rates of injury. They would be most assuredly be less then this data shows! CrossFit in general would probably show that it decreases rates of injury from normal daily living activites. How many people blow their back picking the groceries up off the floor? More then would like to admit I bet. Globo-gyms open their doors to the lowest bidder and then let them roam around picking up and tossing around free weights at will. Saying it that way highlights the error in their ways. “Practice and train major lifts: Deadlift, clean, squat, presses, C&J, and snatch. Similarly, master the basics of gymnastics: pull-ups, dips, rope climb, push-ups, sit-ups, presses to handstand, pirouettes, flips, splits, and holds. Bike, run, swim, row, etc, hard and fast.” In addition, do it under the supervision of your coach, know your limits, but constantly be testing them. Do this and you will be stronger and with out injury. 3-2-1 GO!