Participation in the challenge benefits the LT Michael P. Murphy Memorial Scholarship Foundation. Formerly known as ‘Memorial Day Murph’, The Murph Challenge is an extended version of the Memorial Day tradition that so many supporters have been taking part in for the last several years.

LT. Michael P. Murphy (SEAL) was the officer-in-charge of a four-man SEAL element in support of Operation Red Wings, tasked with finding a key anti-coalition militia commander near Asadabad, Afghanistan. Shortly after inserting into the objective area, the SEALs were spotted by three goat herders who were initially detained and then released. It is believed the goat herders immediately reported the SEALs’ presence to Taliban fighters.

A fierce gun battle ensued on the steep face of the mountain between the SEALs and a much larger enemy force. Despite the intensity of the firefight and suffering grave gunshot wounds himself, Murphy is credited with risking his own life to save the lives of his teammates. Murphy, intent on making contact with headquarters, but realizing this would be impossible in the extreme terrain where they were fighting, unhesitatingly and with complete disregard for his own life moved into the open, where he could gain a better position to transmit a call to get help for his men.

Moving away from the protective mountain rocks, he knowingly exposed himself to increased enemy gunfire. This deliberate and heroic act deprived him of cover and made him a target for the enemy. While continuing to be fired upon, Murphy made contact with the SOF Quick Reaction Force at Bagram Air Base and requested assistance. He calmly provided his unit’s location and the size of the enemy force while requesting immediate support for his team. At one point, he was shot in the back causing him to drop the transmitter. Murphy picked it back up, completed the call and continued firing at the enemy who was closing in. Severely wounded, LT. Murphy returned to his cover position with his men and continued the battle.

LT. Murphy fought on, allowing one member of his team (Marcus Luttrell) to escape, before he was killed. For his selfless actions, LT. Michael Murphy was posthumously awarded the Congressional Medal of Honor on October 27, 2007. We honor his sacrifice and memory though The Murph Challenge. Find out more about Michael Murphy at the Memorial Foundation created in his name. 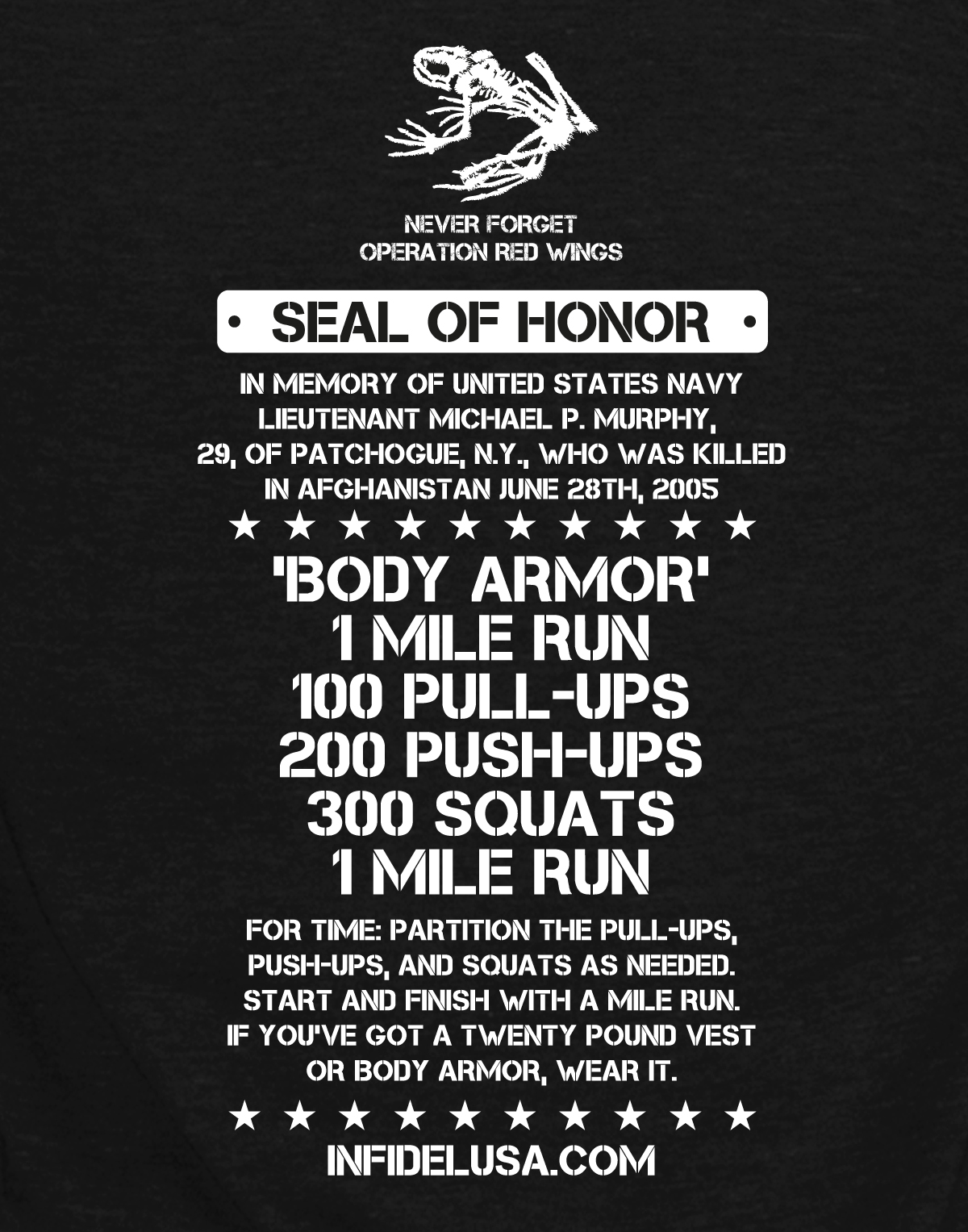 All athletes are encouraged to participate. The WOD will be scaled accordingly.